Fascism enacts its domination not through brute repression, but through liberation—what Herbert Marcuse called “repressive desublimation.” It isn’t by prohibiting desire, but by suspending the normal rules (the so-called “state of exception”), that fascistic violence is unleashed. Libidinal energies are made to serve reactionary ends. Pop is the handmaiden of fascism. 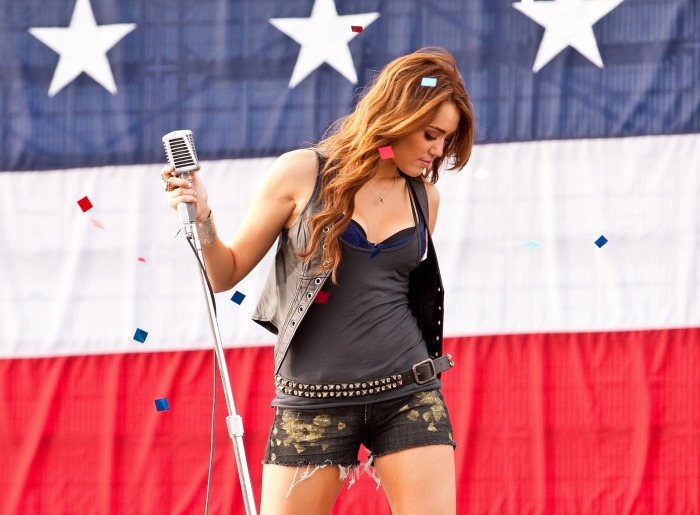 In Miley Cyrus’ “Party in the U.S.A.,” the narrator presents herself as a small-town country girl alienated by big-city life in Los Angeles. The innocent transplant, in cardigan and boots, lost in the land of fame and excess—they’re the ingredients of the classic tale of the prodigal son or daughter, indulging in a bout of libidinal release, only to return because there is no place like home. But something stranger happens. At every juncture of hesitation or regret, she is consoled by a diagetic intervention—first by Jay-Z, then by Britney Spears—to remain. In the music video, a giant American flag unfurls, and a troupe of hyper-sexualized dancers (presumably, her Nashville “girls”) appear in synchronized formation. The lines between country and pop, the small town and the city, tradition and rupture blur. There is no hometown nor Hollywood—all of it’s a simulacrum—there’s just one orgiastic Party in the U.S.A., where the fascist superego commands us all: Enjoy, and all will be OK.

In One Direction’s “What Makes You Beautiful,” the subject is told, “You don’t know you’re beautiful. That’s what makes you beautiful.” Female body dysmorphia is turned into a precondition of beauty itself. You are only beautiful to the extent that you don’t realize your beauty—in other words, you are only beautiful if you don’t realize that you don’t realize that you don’t realize, and so on. Beauty is a conceptual impossibility, an endless striving-after that negates itself. The challenge issued by One Direction is not a sappy message of self-love and affirmation, but a willful dysmorphia: achieve beauty through the constant affirmation of your lack. The subject of “What Makes You Beautiful” is the atomized subject of late capitalism, driven further down the circuit of accumulation and consumption. The secret injunction, of course, is nihilistic: beauty through non-beauty, fulfillment through longing, enjoyment through repression, life through death. There is only one direction, and that direction is fascism.