Transylvanian American Bat Love Association (TAMBLA), the national affiliation of trans-species and mytho-positive civil rights organizations, is writing to demand the immediate removal of your “Dracula” and “Nosferatu” costumes and that your esteemed corporation issue an apology for marketing and for profiting from offensive, culturally appropriative merchandise. 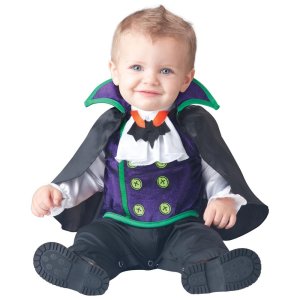 Quite frankly, we were surprised to see such problematic costumes being sold by a national retailer based in Los Angeles, a diverse, multi-kin city where more than one-third of its residents are of Transylvanian, mythological or otherwise fictional descent.

While we do not find the “Baby Pumpkin” costume problematic—given that it clearly represents food—we do take issue with the “Dracula” costume, composed of seemingly traditional Transylvanian livery and a set of mock fangs; and the “Nosferatu” costume, which is nothing more than a Victorian-era cloak. Our problem is not with the attire itself—but with the fact that Party World is marketing these outfits as costumes.

As put by the local chapter of our national youth-wing Students for Transylvanian Justice: “We’re a culture, not a costume.”

Like other marginalized minorities, vampires are real people who cannot and should not be commodified as Halloween costumes. This nation has hosted a history of using caricatures to reinforce stereotypes of otherkin and trans*sylvanians as perpetual foreigners who are somehow less “American” than Privileged White Americans.

The commodification of Halloween has turned our solemn Satanic ceremony into a commercial spectacle, enabling cis-specied, able-bodied, neuro-typical, human-privileged individuals to appropriate, in a spirit of levity, our lived experience and narrative, without the weight of institutional oppression that befalls our nightly existence. This mockery plays a role in cementing stereotypes that retard our march to dismantle the Imperial, Warm-Blooded, Anthroponormative Hegemony.

We hope you heed our demands by (1) removing these costumes immediately from your shelves and (2) issuing a public apology. Should you have questions about future merchandise that may be considered offensive, problematic and otherwise culturally appropriative, please consider us a resource to serve more inclusively your sizable Transylvanian consumer base. We would be happy to meet with you in person, by night, and away from Christian-privileged churches or Italian restaurants, preferably.