It was not even noon, and before my first coffee, and already the legions of lunacy had conspired to ruin my morning.  What can be said about today’s offering of twelve Parisian lives on the altar of savage jihad?  Nothing, really—it seems a waste of breath to utter that which we’ve expended untold ink to say before.  Simply I will point to a column written by a teenage version of myself, which some magnificent basement dweller thought fit to make my first citation on Wikipedia (and, to my knowledge, my only one, but not for lack of trying).

Cartoonist Should Have Defended Her First Amendment Right, The Daily Bruin, May 17, 2010.

(This is, incidentally, why I find hysterical the accusations meted lately of my being a crypto-Islamofascist. Longtime friends and comrades will recall there was a time it was the Muslims who were mad at me.)

My use of the word “savage,” as it happens, is rather deliberate, and not some accidental orientalist slip. I’ve come lately to appreciate that the targets of my scorn will do my job for me, being quite happy to shame themselves: what else but savage are they whose stated enemy is the crown of civilization itself? Words are wasted having always to repeat this obvious fact; but the fascists of the world never tire of keeping me in business.

There is one promising thing which demands our attention, and which makes worthwhile all my breathless lungs’ frustrations. Where are the sinister bullies who insinuated that Salman Rushdie got what he deserved? Or the cowards who saw cartoons to be the greater threat to peace? Instead we see a groundswell of solidarity with the victim journalists, recited in the precious litany of “Je suis Charlie.” Of course, one ought on principle to be wary of all forms of martyr-identification, but to a point the gist is right: all are victimized here who stand for the proposition that being offensive is not the same as being fit for summary execution. Perhaps it took a dozen consummated deaths to agree a lawful act is not an invitation to a beheading. 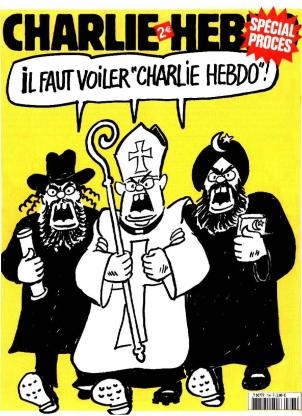 We will see in the coming days how far that principle will go. Already one can hear the subtle shifting gears of the securitarian machine, lubing up for an anti-Muslim witchhunt. We have a Congress poised to pass a new Authorization for the Use of Military Force, and a Republican majority salivating for more. Is anyone surprised that while the Administration continues to absolve the torturers and rapists of Guantanamo Bay, it has pledged “to provide any assistance needed to help bring these terrorists to justice”? Barbarism slouches toward battle under many names: some are those of Prophets, and others of profiteers.

For now we know at least that when it comes to the offended and to the fearful, the term “trigger warning” really works both ways.