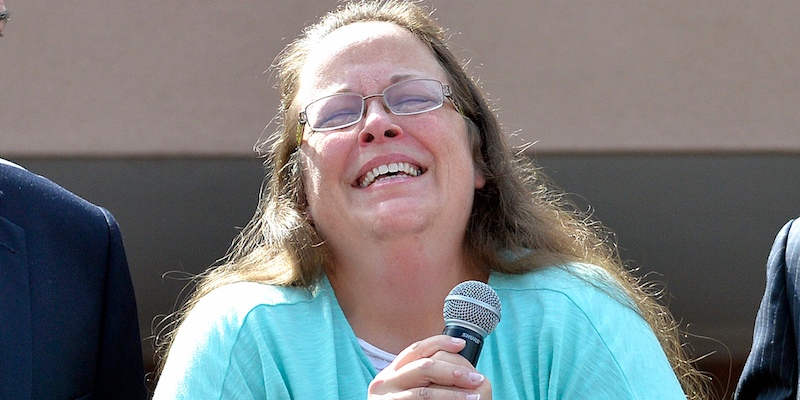 One has to admire the twisted logic of the martyr. There is something brilliantly perverse, even suicidal, in the whole martyrdom charade—not simply in how it relies for its effect on the martyr’s own destruction, but as well in its dependence on her persecutor’s strength. (The Western fascination with the martyr descends from a bygone time of history, when one had literally to die for her beliefs: more specifically, when the Romans declared open season on the early Christian church. And with a willfully executed Nazarene as their example par excellence, what more could you expect?) The martyr’s best friend is her oppressor; without him the whole gig falls through. And, to be fair, it really works both ways. The principal benefit of the martyr, from the oppressor’s point of view, is that both she and he are agreed on how she is to be disposed.

“The weak and the botched shall perish: first principle of our philanthropy,” wrote Nietzsche. “And one should help them to it.” The most recent applicant for this particular brand of charity is the Rowan County, Kentucky clerk called Kimberly Bailey Davis. Faced with the “heaven or hell decision” of whether or not to issue a marriage license for a couple of “Christ-despising queers,” Mrs Davis chose the road less-traveled; she went the path of the martyr. She refused, in other words, to do her job—sworn oath and court order be damned. And for five exquisite days in bare contempt of court, Mrs Davis did for us what we would’ve liked to do ourselves: keep the loonies behind bars. 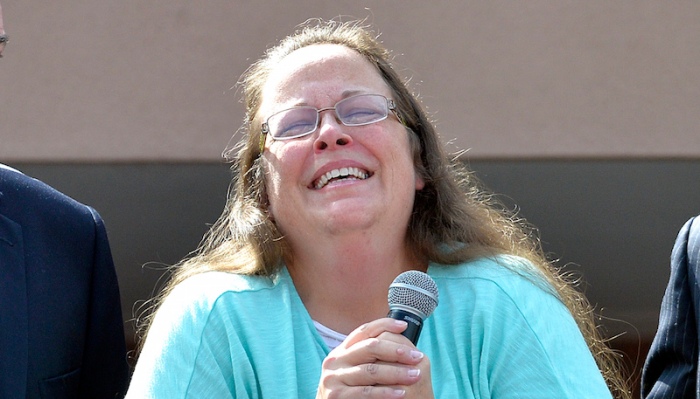 Having come of age myself in the company of rabid fundamentalists, I know a thing or two about the radical Christian Right. And if there is one thing the otherworldly like to do more than to lament the secular world, it is to feel sorry for themselves. The self-anointed victims of the modern Christian Right have made a martyr of Kim Davis, now destined to a place in the pantheon of saints in Christ’s crusade against the gays. Ted Cruz, a senator from Texas and Harvard Law alumnus, said of Davis’ arrest: “Today, judicial lawlessness crossed into judicial tyranny. Today, for the first time ever, the government arrested a Christian woman for living according to her faith.” (Well, no, she was jailed for disregarding a court-ordered injunction in the course of a public office, but that’s a thing one can’t expect a Harvard boy to understand.) Mike Huckabee, the former governor of Arkansas, has said, “I thank God for Kim Davis, and I hope more Americans will stand with her.” And these are only two of our elected representatives and aspiring presidents who’ve spread the Gospel of Kim and preach its homily of open agitation against U.S. federal law.

Martyrdom is part of the religionist’s DNA; messianic lawlessness, too. Perhaps they see in Mrs Davis a latter-day John Galt, shirking duty for the sake of a radical, yet principled, commitment to individual rights. But Kim Davis is no John Galt. She is the worst form of social parasite: flouting flagrantly her sworn duty to uphold the law of the land, while continuing to reap the benefits of a public salary and pension. The intellectual amoebae of the Republican Party have made a hero and a saint of a mooch and flunker of jobs. 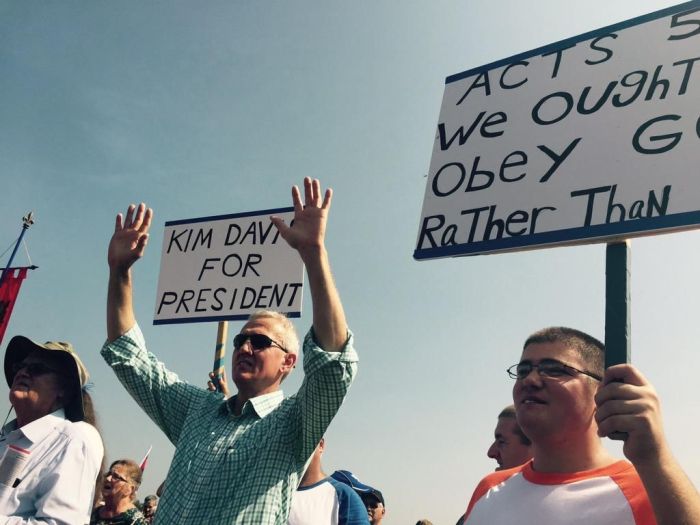 Now that Mrs Davis has been happily inflicted back upon the public, it is necessary to state clearly what this whole bureaucratic hissy fit was all about. It was not about a private individual being forced to condone or to approve of homosexual marriages, nor even to enable them to wed. This was about a public official—elected and paid for the task of issuing legal documents affirming that which is already enshrined by law—insisting on the right to play hooky. Would it suffice to have some deputy dispense the licenses instead? Not for Our Lady of Rowan County, for whom the simple presence of her name and title on same-sex certificates amounts to blasphemy against Christ.

One can only guess how much of this was thunk up by her lawyers, but in her motion to the Court of Appeals, Mrs Davis offered up an obvious alternative: have some other official issue licenses without her name. And although this is precisely what her deputies have done during her absence, Mrs Davis seems to have hallucinated the false dilemma that this was erstwhile unavailable. I am willing to accept that dear Kim Davis, in her infinite piety, may have overlooked that possibility, or perhaps that its validity was not quite clear till litigation. Yet if this narrow accommodation is all Kim Davis ever dreamed of, one wonders why she had taken pains effectively to hijack the state’s marital institution, and to be brought to federal court, before requesting such relief herself.

The answer is that this whole episode reeks of manufactured martyrdom. Upon the malodorous pyre of Saint Kim, the Christian Right has self-fulfilled its prophecy of Christian persecution. Mrs Davis had to break the law—rather than to seek declaratory relief from the get-go—in order to enact the delusional daydreams of religious paranoiacs. And by provoking the courts to compel restraint on a recalcitrant official, they’ve stitched a rather handsome mug shot to the banner of “religious liberty.” But it is only restraint to the extent that Emancipation was “imperial aggression” upon the South; only liberty, in the sense of Kansas’ “right” to remove black kids from public schools. One stares with wonderment and with nausea at the Right’s vertiginous flair for victimhood. 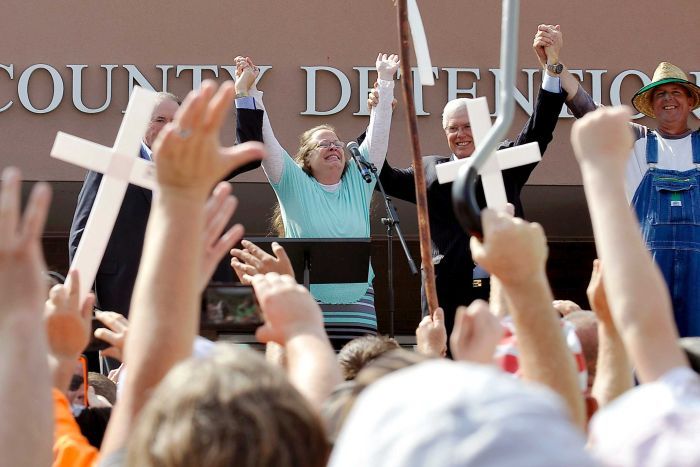 The legal blogosphere has been abuzz with debates on the many contours of this case: all manner of problems arise, logistical and precedential, if we let public servants shirk their duties when their deity feels like it. However fraught or frivolous these concerns may be, it really shouldn’t matter how state law can be employed to save Kim Davis from hell’s flames. It ought truly to be troubling that an agent of the state can disrupt, for the pleasure of her god, the routine functioning of government; now let us see how sweet it is to wait upon their awful pleasure. I somehow doubt that Messrs Huckabee and Cruz would rightly like some Wahhabi D.M.V. clerk to go A.W.O.L. at the sight of females in his queue (but then again, who knows?).

The basic premise of religious accommodationists is that a public servant can renege on public duties, so long as someone else picks up the infernal tab. “No homosexual’s rights need be deprived,” the logic goes, “but let’s not make the conscientious Christian get too gay at work.” There is a colorable argument that this should be the case for private institutions; yet the religionist will not rest until she can exact her saintly whims upon the state. Now, this may not be the theocratic takeover we secularists have long forewarned, but here I thought that we’d already come to a consensual understanding that “separate but equal” just doesn’t quite fly.

Still, in many ways, I am grateful for Kim Davis. In the span of a couple of weeks, and with hardly a credential to her name, Kim Davis has become the face of the modern Christian Right; and she’s revealed, through no fault or intention of her own, their shimmering, unalloyed stupidity. This is what they mean by “religious freedom”; this is their vision of the world to come. Bear in mind that days of persecution are to them somewhat of an End-of-Days prerequisite—preparation, as it were, before the real fun can begin. And when that battle hymn is sung, the church militant will waste no time to bring our pagan world to ruination.

What I see in Kimberly Davis is the apotheosis (if I so may phrase it) of a tendency that has always reared its sniveling head among the Right.  Derived from common right-wing paranoia, and nurtured by religious apocalypticism, it finds expression in our nation’s churches and in the backwoods of the Internet; it finds its medium, not too seldom, in the barrel of a rifle.  It is in fact entirely unsurprising that Kim Davis would be offered “protection service” from the extremist armed militia called the Oath Keepers—the selfsame group, named without an apparent ounce of irony, that dogged the streets of Ferguson with their semi-automatics—sworn to open insurrection against the U.S. federal government.  It is here, in the apocalyptic struggle against imagined or prophesied tyranny, that the conspiracist and the religionist converge.  Let Kim Davis remind us all that there exists a sizable, and politically potent, element in our society that actually believes it is their duty to resist the Antichrist’s Empire (of which godlessness and gays are conspicuous ingredients); and they’d like nothing more than to egg Armageddon on, rather literally.  Let history remember 2015 as the year, and Rowan County as the site, of the Right’s declaring open hostility to the U.S. Constitution, and to secular modernity more generally. It is a confrontation devoutly to be wished.