Speaking generally, the phrase “eruption of violence” is objectionable on both aesthetic and semantic grounds: it is redundant—eruption being by its very nature a violent thing—and, with perhaps two notable exceptions dating to 1946, the visitation of violence hardly ever simply happens. It is not an event so much as an act, perpetrated by morally cognizable agents, who might achieve the ignoble and the horrific but seldom reach the straight volcanic. It is especially unbefitting in the context of a military occupation, which can be defined, by deed and by law, as one long protracted act of violence against the occupied population. Violence is not a phenomenon that “erupts” within, or even against, a military occupation—it is the essential and constitutive feature of the whole damn game.

The friends of Israel love to forget this inconvenient fact, as if the violence and trauma inflicted upon Israeli Jews emerge ex nihilo and sui generis, while the daily degradation and decimation of Palestinian lives become reduced, at best, to trivial background noise. (Usually they are ignored forthwith.) This collective, and internationally contagious, amnesia has been part of their branding campaign since 1948. Forget this, and suddenly it is the stone and the knife that are the real problem, why do they hate us so, and after all we’ve done for them! This mentality is followed straightaway by the erection of cages and colonies on stolen land, or the occasional ethnic bloodletting, as if to beat a barking dog into submission and then to ask Why can’t we just have peace? The question, as any self-respecting thinking person ought to know, is internally incoherent; violence cannot “disrupt” a status quo that is premised, in and of itself, on violence. Despite this, or rather because of it, the eruption metaphor avails itself at least to this single aspect of the current bloody phase in the Israel-Palestine “conflict”: namely, that it is the natural and cyclical discharge of seven decades’ worth of internalized brutality, begging for release. 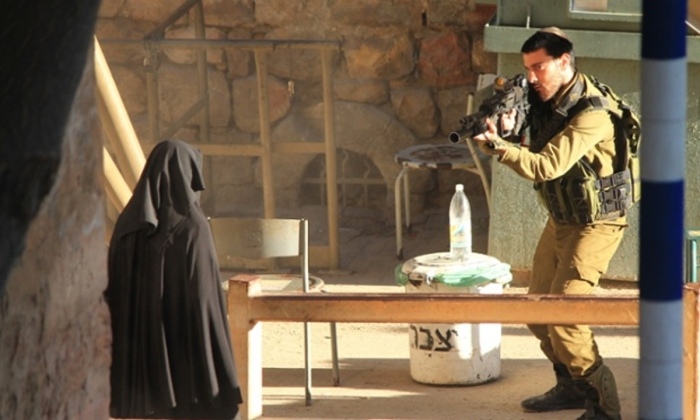 It is an impoverished and futile endeavor to divine the origin of precipitous violence. In at least the present case, the usual suspect—some exotic form of unmitigated Islamic evil and anti-semitism—seems improbable: the knife-wielding shuhada of today share no fondness for the shahada that was the hallmark of the belted bombers of yesteryear. And yet any attempt to “rationalize” the violence is dismissed contemptuously as an apologetics of murder; any suggestion that Palestinians might be motivated by something rather less than unbridled, pathological Jew-hate is seen to be an excuse and an invitation to a holocaust. As it is, I have no doubt that many Arabs harbor deeply racist and antisocial attitudes. But try living in perpetual stasis, in a beggared and third-class existence, with your home despoiled and people displaced and Jewish lynch mobs chanting mavet la’aravim in your own neighborhood—not to mention your homeland—and see how well-adapted you turn out to be.

One of the signal lessons I received by working in death sentence mitigation is the distinction to be drawn between culpability and guilt. The molested childhood, the intractable poverty, the crippling disease—none of these absolves the wicked axe murderer. But they reduce his blameworthiness. And they signify, to those of us actually interested in lessening the misery of the world, that condemnation of the criminal can only go so far. A similar logic operates in the defense of provocation: one grasps intuitively the moral chasm between spontaneous and precipitated aggression. Now, I can anticipate already the imputation that what I really mean to say is murdered Jews were asking for it; but before I am accused of victim-blaming, two points must be made. The first is that by no means can a person’s mere existence or presence be adequate grounds for lethal force. But secondly, when that presence is predicated on the inherent structure of dispossession—which is, by its founders’ own admission, at the very core of the Zionist project—it takes no concession or absolution of murder to say resistance was provoked.

This is the unspoken assumption behind the stance of Israel’s U.S. financiers that the Israeli settlement of Palestine is “an obstacle to peace” (which is already a punishable euphemism of the international consensus that settlements are illegal). Yet the reticence to lay but a semblance of blame upon the inveterately blameless Israel has squandered our ability to call things by their names. More to the point, the better question is this: What is the alternative explanation? Are we truly to succumb to the tautological and racist lies of Likud and Netanyahu that the reason Palestinians turn to violence is because they are Palestinian? Are we willing to accept that 67 years of liquidation, theft and slander have nothing at all to do with terrorism? I have already written at length about how the tortured and demented reasoning of Israeli security policy perpetuates itself. In point of fact, the State of Israel has done everything within its power to protect its Jewish citizens, except to actually address what might compel a teenage boy to stick a knife in a passerby. I think we all can agree that whatever the origin of Palestinian violence is, it is not because they haven’t quite been dispossessed or beaten into submission enough.

None of this should sound new to hear or to say. Anyone who obviates this obvious fact is asking not only to be called a liar and a fool, but also to insult our own intelligence. Unavoidably, the very premise of this essay is problematic, for it assumes the acts of the occupied, and not the occupier, require explanation. Meanwhile, the State of Israel continues its concerted efforts to punish the Palestinians for their stubborn refusal to let settlers steal their homes, or else to disappear quietly from the Land of Moses, as they had already from the history books. Here there is an intellectual responsibility to say that the deliberate menacing of civilians, even settlers, is both criminal and self-defeating. But nor is there a moral or legal equivalence—nor even resemblance—between the bloody, sweaty toils of colonial pillagers and those of their indigenous resistance.

What the stoning and stabbing bugaboo of Palestine has revealed, or made more manifest, is this. The old establishments of Israel and Palestine (such as they are) have become increasingly irrelevant. Neither the guerillas of Gaza nor the collaborators of Ramallah exert much say on the local shabab; as for Israel, it is clear that here the government is not the primary actor, but rather the reactive and pliable pawn of the messianic thugs. I believe Bibi when he says he has no interest in tampering with the “status quo”—his administration being its principal beneficiary. But whether he likes it or not, the annexationist and genocidal Right watch gleefully as the Israeli public devolves into an armed and vengeful mob, and the State is forced to do their bidding. And the curtain has been drawn from the contemptible lie, transparent as it was, that the “Arab citizens” delight in the milk and honey of the Jewish State as equals. Whether in Jerusalem or Afula, in Bethlehem or Beersheba, the Palestinian will always and only amount to the rank of an enemy combatant.

I am reminded of the warning Samuel Clemens gave one century ago: “We cannot maintain an empire in the Orient and maintain a republic in America.” He was speaking, of course, about the plundering and spoliation of my father’s homeland at the “pacifying” hands of mine. His words were right then, and they are right today; they are right as well for America’s impish, whimpering garrison state on the eastern Mediterranean. We are witnessing today the desultory gasps of a racist and colonial régime struggling to negotiate its latent contradictions. And there is now, for better or for worse, no one else to blame and no one left to bomb.